In 2014 I got selected to participate to the artistic sent around the Pont du diable (UNESCO and Natura 2000 site). The theme was « old branches and crazy weeds ». Continuing my research about frames, here’s what I built : 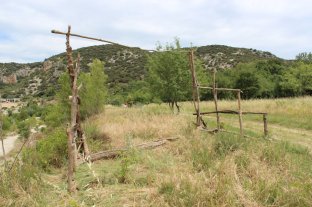 When old branches structure the way we look at things, how do crazy weeds deal with that ?

The sent is supposed to stay put for 5 months, my frame got partially hidden, incorporated by the environment as planned.

For the second collective exhibition « Les sapins zinzins » (12/1/2013-1/6/2014, Mourèze, Languedoc Roussillon, France), I teamed up with my dear friend Ghislain Wilczenty for this piece : 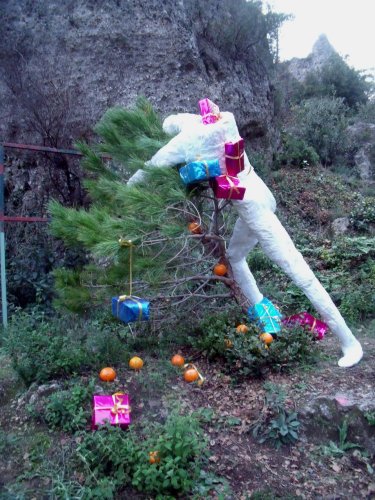 For the artistic sent of the 9th festival de Mourèze, in august 2013, the theme was « fantasm ». Considering the landscape, and the project that other participants actually brought up, it was important to me to erect a more unusual shape. I used a pattern already explored in a smaller scale and which you can find on the Anato(me) page. 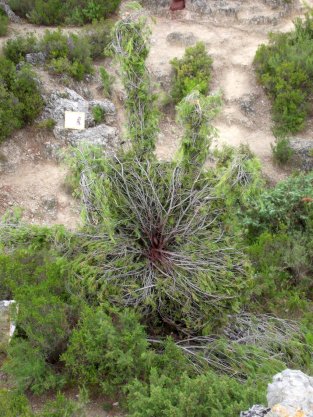 It’s thanks to the pines, here considered invasive, that I can erect, among the dolomites, often read as phallic, a body part that is no stranger to sexuality.

I fantasise about world peace. In these days lacking of humanity, sensualities are to often frustrated and we grow upset. Sometimes, a caress is enough to confort. Once cooled down, concerns may seem lighter or a solution may even come up.

This was my first installation. It was for the artistic sent of the 8th festival de Mourèze, in august 2012, and the theme was « music ».

An invitation to (re-)gain consciousness of oneself and ones place in an environment. Play ones own music, listen to oneself and hear that music of the world

I materalized « steps », each filled with different materials making a particular sound as visitors would walk around.

The rythm of a step and the choices people would make on the path would make each walk sound different. And it was impossible to play the same music twice as the materials break into smaller pieces each time. In the end, the sounds were much more discreet. It was much harder to hear ones own music following a path already taken by so many…

During the festival, a collective piece was hung in the center of the village.

Sticking th he theme, we were invited to bring masks that could figure on a musical score. I chose to make several as social movements where already getting louder concerning openning marriage to more coples :